A triple threat in basketball is the most basic position to hold the basketball. In this condition, the player and the ball are stationary in a specific position, and no dribbling is happening.

This position gives multiple options to the player like pass, shoot, or dribble the ball. So the ability to take part in these options is known as a triple threat or triple attack. This beginner to advance level guide will help you to understand this concept better.

What is a triple threat in basketball? 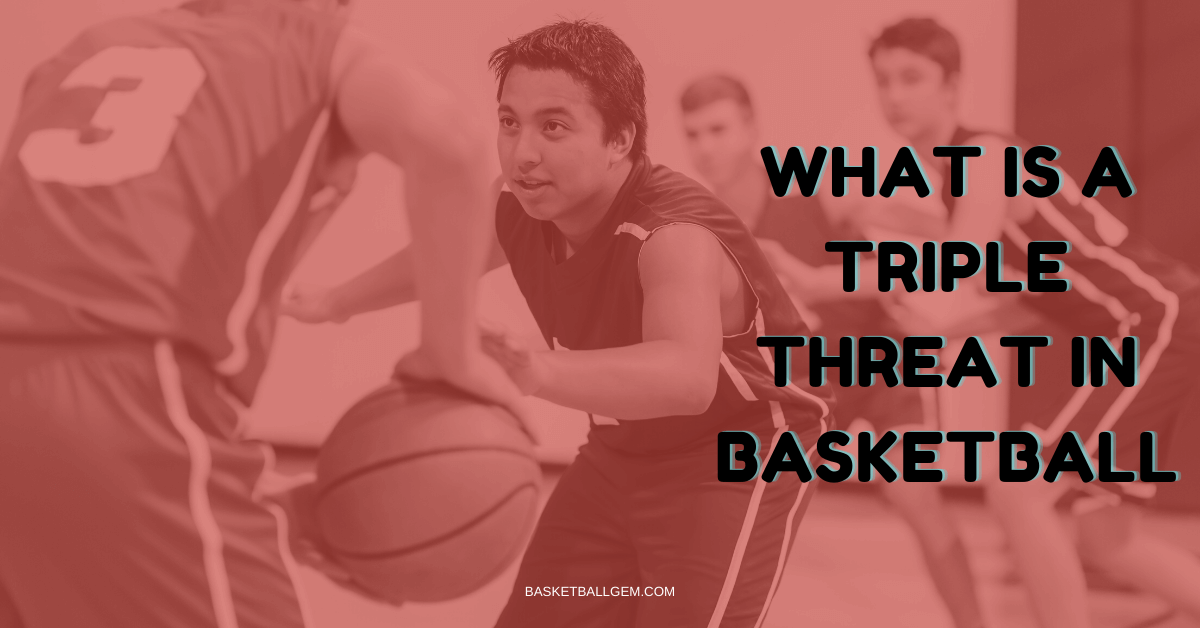 Basketball is a moving game, so it essential to understand each part of this game. To master this game, you should learn how all the game components work. The triple threat or triple attack is one of the most common terms used in basketball.

When an offensive player comes in front of a defender, a triple threat situation occurs in an athletic stance. In this position, the player should hold the ball near the right or left hip, knees bent, eyes up, back straight, and body ready to move. Don’t forget to put one foot in front to make the best use of the available options.

Offensive Options from the Triple Threat

The offensive player that is in the triple threat position has three options.

Now it depends upon the player which option he prefers according to the actual situation. This is one of the most dominant basketball game positions because the defender can’t guess what will happen next. If the defender is a little far from the offensive player, then he may shoot the ball.

Moreover, if the ball holder is far away from the goal and sees his teammate on the perimeter or right behind the defender, he may pass the ball. Furthermore, if the offensive player dribbles the ball, then the defender may force him for a bad pass. Above all, the guard can utilize all three options efficiently in a triple threat position.

If you know what you are doing and how well you can utilize the available options and read the defender’s mind, you can create a win situation. Below are some golden tips to take full advantage of triple threat offense:

Don’t put your head down in a triple threat position; instead, you should read the floor by keeping your eyes up.

You should keep the ball moving if needed; otherwise, you can directly shoot the ball.

Knowing your defender’s moves can be a great plus so that you can make a correct move. So you can judge the defender by asking yourself some quick questions like how much I am far away from the defender.

Moreover, can I perform the Jab step? Is the defender showing the fake or solid defense? Is he forcing me in any specific direction? So knowing all the answers to these questions will help you to choose the best move.

It would be best to judge your help defense to quickly decide which move could be beneficial for you to choose.

To deceive the opponent, you should learn about playing basketball at different speeds. In this way, you can perform a couple of quick moves efficiently in a triple threat position.

When you think to dribble the ball, then take the ball away from the defender then attack in a straight line by pushing the ball out. Don’t keep your eyes on the separation of dribbles so that you can focus on the defender’s move. Similarly, you can also focus on the goal basket instead of concentrating on the floor.

If you face an aggressive defender, it’s better to move into a position of strength. If you don’t do so, he will minimize your space; then, you can only perform a forced move.

You can learn foot moves by doing practice with live defenders so that you can effectively tackle the triple threat position. Moreover, it would help if you polished your dribbling techniques to sell your moves without hesitation comfortably.

This shot is the base of almost every move you can choose in a triple threat offense. By learning this shot, you can quickly master other shots; otherwise, it will be hard for you to learn different moves. You can give a hard time to the defender by mastering the jab step shot.

If you are a beginner player in the basketball arena without proper coaching, you can follow these recommendations:

You can also learn and follow the recommendations of your coach, depending upon your scenario.

1. Why is it called a triple threat?

We called this triple threat because you can perform three different moves in this position.

So from the defender’s point of view, these three threats are known as a triple threat.

2. What are your options when you are in a triple threat position?

Usually, we have three options in the triple threat position that is:

So a good player chooses the best suitable move according to the actual condition in the basketball court.

3. What are the steps to make an accurate triple threat position?

The ideal position for the accurate triple threat position is: