The actual average basketball game time is 48 minutes that includes four half of 12 minutes each.  Moreover, the average time required for one complete basketball match is 2.5 hours that consist of halftime, foul time, or any other clock stoppage time.

Furthermore, there are different basketball game levels like middle school, high school, college, and associations like NCAA, NBA, WNBA, and professionals. So the length of each level game is determined by the International Basketball Federation.

In this guide, you will learn how long the basketball game is at each level, so join me below.

How Long Is a Basketball Game? 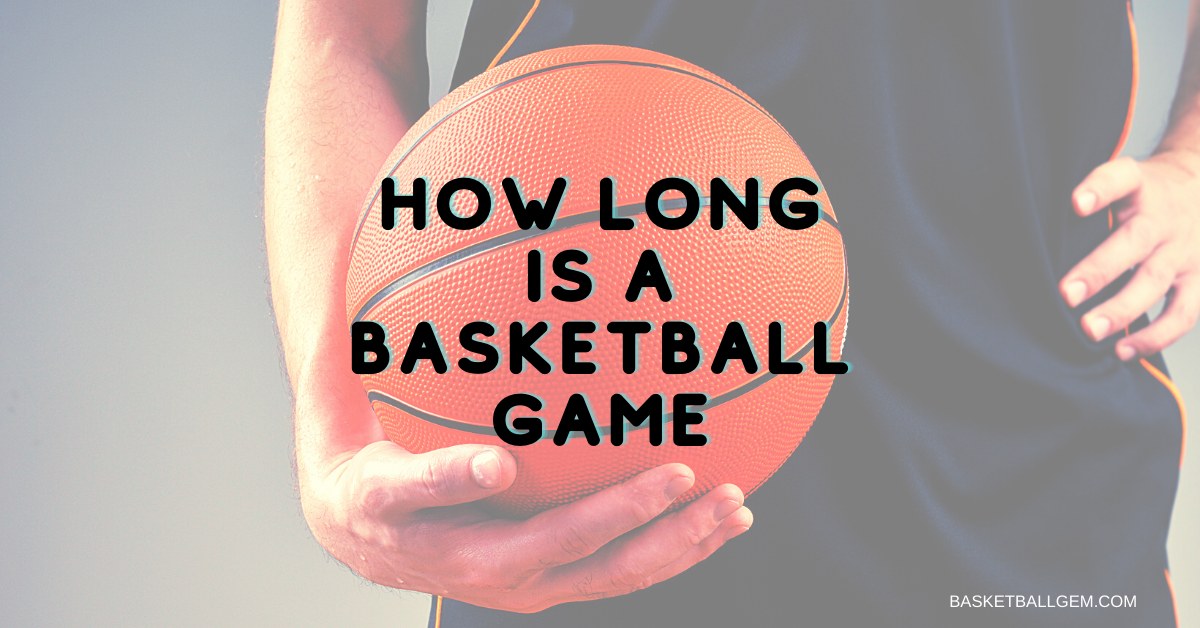 The actual game time at all levels of basketball games is no longer than 1 hour. However, what makes each game much longer is the different stopped time during the game. The stopped time could occur due to different reasons that are following.

It is the actual duration of gameplay. Moreover, in middle-school and high-school level games, this time is divided into four quarters that are 8 to 12 minutes long. Furthermore, college and NCAA level games include two halves instead of four quarters lasting 32 to 48 minutes.

It is a break time between a basketball game that can take a total of 15 minutes. Moreover, halftime occurs after the 2nd and 3rd quarter at middle and high school level games. Furthermore, it occurs after one-half at NCCA and College level games.

Timeout is stopping the shot clock and game clock temporarily. It may occur due to different reasons like draw up a play, allow players to rest, make a substitution, etc. Moreover, the timeout is different for different leagues that are 30 or 75 seconds longer.

The shot clock is a time in which a team has a ball possession before shooting it. Moreover, if a team would have a shot clock violation, then they lose the ball’s possession.  The shot clock is introduced to increase the pace of this game. Shot clock time is different for different leagues, like 20 sec at the college level, 24 sec at the NBA level, and 30 seconds at the NCAA level.

The clock is stopped whenever a foul is called. Usually, the fouls consume 45 seconds to 1 minute of game time on average. Therefore, if there would be 30 fouls in a game, then the basketball match will be finished in approx thirty minutes extra results in increasing the game time.

These timeouts are also known as mandatory timeouts for promotion and advertisement breaks. Moreover, these timeouts don’t take extra minutes of the game, but TV ads will be shown during game timeouts.

The majority plays with two halves in Middle School Basketball game that are 18 minutes long. Furthermore, it may change into four quarters of 8 minutes duration for low-level beginners.

The halftime of 15 minutes will occurs after one-half or two quarters.

With a stopped clock at the last minute, the overtime period in a middle school basketball match lasts for 1 to 3 minutes.

The middle school basketball administration approved the shot clock time for boys to 35 seconds and 30 seconds for girls.

How long is a High School Basketball Game?

Basketball is one of the most famous games played in any high school. So the total time distribution of one basketball match at the high school level is the following.

High school level basketball matches include four quarters of 8 minutes each. So the total quarter-time required is 32 minutes. High school game uses quarter like NBA games, but their time is short.

Furthermore, the halftime occurs between the 2nd and 3rd quarter that lasts for 10 minutes.

If the basketball match ties between two teams, then the teams will get 4 minutes of overtime.

At a high school level basketball game, the shot clock time is 30 to 35 seconds long.

The total time for one match in high school is approximately 1.5 hours long, including quarter time, halftime, overtime, clock stoppages, fouls, and breathers.

How long does a College game usually last?

Basketball is also famous in high learning Institutions as an extra circular activity. So the total time distribution of one college-level basketball match is the following:

The college basketball games use two halves instead of 4 quarters like in NBA and high school level games. So the halves time required for a college game is 40 minutes that consists of two halves of 20 minutes each.

Moreover, halftime occurs between 2 halves that last for 15 minutes, similar to NBA-level games.

The 5 minutes of extra time is given in the college-level basketball games.

At a college-level basketball game, the shot clock time is 30 sec for women and 35 seconds for the men’s team.

How long is a college basketball game on TV

On average, college-level games last on TV for 2 hours and 10 minutes.

How long is an NCAA Basketball Game?

NCAA stands for National Collegiate Athletic Association that is Basketball Association at the college level. The minute’s breakdown of the NCAA basketball game is explained below.

If the basketball match ties between two teams, then the teams will get 5 minutes of overtime.

This game is too long and consists of many times out that last for 30 minutes.

The shot clock will come into play if the ball possessions are changed, or the ball hits the rim. So the short clock time in NCAA for both men’s and women’s is 30 seconds.

The total time for one NCAA match lasts for 2 hours, approximately that includes halves time, halftime, fouls, and timeouts.

How long is an NBA Game?

The actual time of the NBA game is 48 minutes long. Its time distribution is given below.

The NBA game consists of four quarters that are 12 minutes long. Moreover, the half time is bound to increase if the match is tied between two teams.

In an NBA game, the halftime period is 15 minutes long that took place after two quarters.

NBA timeouts last for 1 minute and 15 seconds. Each team gets seven charged timeouts, and if a team runs out of time, both teams will get two more timeouts.

The shot clock time in an NBA game is 24 seconds.

Usually, the overtime in an NBA game is 5 minutes long.

Total Time in an NBA Game:

If we combine all the time divisions in the NBA game, then the total time would be between 2 to 2.5 hours.

How long is a Women’s NBA Game?

WNBA game is almost similar to the college-level basketball game. The time distribution is given below.

The WNBA game consists of 4 quarters that are 10 minutes long.

In a WNBA game, the halftime duration is 15 minutes that occurs after two quarters.

Total 5 minutes of overtime is available in the WNBA game.

So if we add up this time breakdown, then the WNBA game’s total time would be 2 hours and 10 minutes, similar to a college-level basketball game.

1. What time does the NBA game finish?

If the NBA game is finished without any overtime, it will take 2 hr. to 2:30 hr. including fouls, shot clock, TV timeouts, half time, etc. Otherwise, the match time would be increased by 5 minutes per overtime until the winner decided.

2. How can I watch NBA games for free?

You can watch the NBA game live for free on (nbabite.com). The process is straightforward.

3. Are there ties in basketball?

No! The match can’t be tied in a basketball game. If both the team score will be equal, then they will get 5 minutes of overtime. At this time, the team with high scoring points would be the winner. Moreover, if the match is tied again in the overtime, the overtime will be awarded the same rules and regulations. This overtime process will be continued until the winning team is decided.

4. How many quarters are in basketball?

There are four quarters in a basketball match like in an NBA game. Moreover, in some basketball leagues like NCAA, the regulation time is divided into two halves.

5. Why is basketball quarter 12 minutes?

The NBA rules state that the quarter would be of 12 minutes. There are four quarters in an NBA game that lasts for 48 minutes.

6. How long is the break before extra time?

The rules allow a 1-minute break before extra time to get a drink, relax, and change ends.

7. What’s the most overtime in the NBA?

The NBA game with the most prolonged overtime was played 70 years ago between Rochester Royals, and Indianapolis Olympians played at Edgerton Arena. A total of six overtimes were taken that lasted for 78 minutes, and finally, Indianapolis won the game with 75-73.

8. How many minutes are WNBA quarters?

Women’s NBA matches have four quarters. One quarter is 10 minutes long and the total regulation time for WNBA matches is 40 minutes.

9. What are periods called in basketball?

Periods are also known as quarters in a basketball game. One period would be equal to one quarter in basketball.

10. What sport has the shortest playing time?

Basketball has the shortest gameplay time as compared to other sports. If we consider only the actual playing time of different sports, then basketball is a 48 minutes longer game. Moreover, the American football and ice hockey game consist of 60 minutes. Furthermore, Rugby is for 80 minutes, and soccer lasts for 90 minutes.

With this basic to advance level guide, we can conclude that different basketball associations and Leagues have their timings. Therefore, your professionalism plays a vital role to understand how long is a basketball game at different levels. Moreover, there should be one winner in every basketball game, and it can never end with a tie. Finally, you can choose the match of your choice to watch easily with this guide’s help.