Carry in basketball or carrying/palming is a violation in which a player lifts the ball facing the sky and pauses dribbling for a while. Moreover, this is a basketball rule that everyone should understand and follow to play this game without any confusion.

Furthermore, you can avoid the referee’s palming call through continuous dribbling and keeping your palm downwards towards the court without any hesitation.

Whenever the referee blows the whistle to give the carry call, a turnover occurs, and the offensive team will lose the ball’s possession. To make it more understandable and take away your confusion, we’ve covered the carry thoroughly, like its definition, examples, rules, etc., so that you can play confidently.

What is a Carry in Basketball? 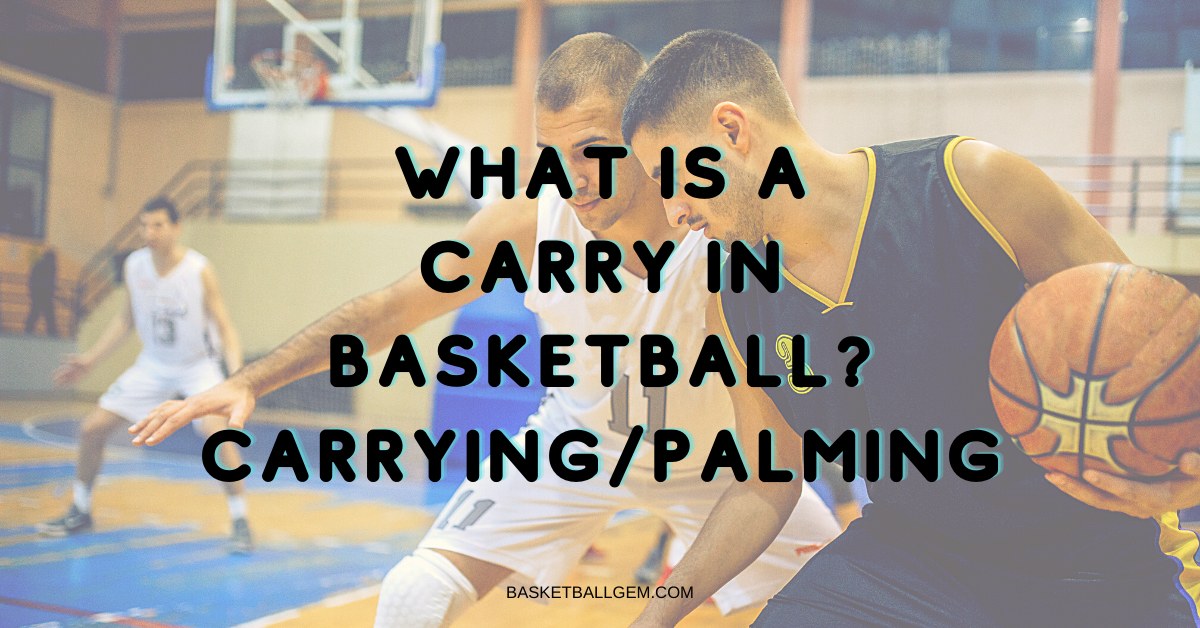 True basketball fans know about the carry in basketball. Moreover, the carrying is rarely observed in professional games and often seen in junior-level games like middle and high school. Furthermore, it doesn’t occur very often in professional games doesn’t mean that the palming can be ignored easily. Besides this, the referee seems to be a little lax because it could become controversial sometimes, but rules strictly discourage this violation.

Definition of a Carry in a Basketball:

When an offensive player dribbling the basketball stop dribbling for a while and holding the ball facing up, continue its dribbling again. This condition is known as carrying, palming, or carry in a basketball.

Examples of a Carry in a Basketball:

Allen Iverson, known as the crossover king, got a referee’s carrying call on March 12, 1997, while performing crossover in his signature style. You can watch the video to get better clarification.

What is considered a carry in basketball?

Sometimes, it becomes challenging for referees to call a carry due to the ball’s angle and position. However, if the ball would be in a position where the palm and ball face the sky, it would be a carry; otherwise, it’s okay if it is not at rest during the same position.

Moreover, some players perform their signature styles so that it looks like carrying, as in the case of Allen Iverson. Therefore, let’s dig deep into this concept to know what move could be considered an actual carry.

It’s a crucial move that the experts can perform to avoid palming; otherwise, it’s improper execution to attempt the carry. As we discussed earlier, the most controversial crossover by the legendary player Iverson whose quick crossover was considered as a carry in a match. Therefore, you need to be the master of dribbling drills to perform crossover efficiently to avoid any violation, including carrying.

The hesitation move is used to deceive the defensive player and fail to execute it properly, leading to carrying violation. Moreover, the offensive player slows down his dribbling near to a complete stop without losing the basketball control in this move. Therefore, it needs to perform more carefully without carrying.

The fake shot is another way to trick the opponent in which you pose like shooting the basket. However, the offensive player will fake his movement by picking the ball with two hands to shoot the basket and make the opponent off-balanced to dribble or pass the ball. Therefore, this fake shot also requires focus and skills; otherwise, it will carry in basketball.

Many rules in basketball sport changed from time to time. Similarly, carrying/palming of basketball is added since the game evolved, and it became one of the most controversial rules in this game. However, the NBA basketball rule no. 10 (Violations and Penalties) (Section II – Dribble) states that:

Therefore, it’s up to the game referee how much he understands and interprets the carry violation. Lastly, you haven’t noticed many carry violations in professional-level games like NBA because doing so may cause controversy and delay the game time.

What happens if you carry in basketball?

The palming/carrying or a carry in a basketball result in a turnover. If an offensive player got a carry violation, they lose the ball’s possession as a penalty, and the referee will give the ball to the defensive team.

How to not carry in basketball?

The only way to avoid carrying is to improve your dribbling skills because practice makes a player perfect.  Moreover, As we know that knowledge is power, so we should educate the players about carrying or palming.

Furthermore, the coaches need to guide their teams about not carrying and executing a perfect dribble. Lastly, if all the basketball gems follow these rules more honestly, this game would be exciting and entertaining.

Do players still carry in basketball?

Yes! The carrying seems legal in basketball because the violation’s frequency is high; that’s why some referee avoids it to avoid the delay in this game.

Moreover, it looks like a norm in professional leagues and associations like the NBA because players perform this violation mostly during dribbling. Many players make this violation, but the following are on the top of the list.

Difference between Carrying and Traveling

Carrying: When a player holds the ball at rest for some time and puts his palm underneath the ball during dribbling or moving from one point to another, a carry violation occurs.

Difference between a Carry and Double Dribble

These violations look very similar but have differences.

Double Dribble: When a player uses both hands for dribbling or stops the dribble and starts again after the pause.

The result of double dribble comes in turnover, which means the loss of the ball’s possession. This violation mainly focuses on stopping the basketball.

Carry in Basketball: A violation occurs when a player puts his hand under the basketball, stops dribbling for a while, and then resumes it. This violation mainly involves hand positioning.

Whenever carrying or double dribble happens, the turnover occurs.

Know More About: Turnover in Basketball

How do you dribble without carrying the ball?

Dribbling is an art that a player can master by practicing regularly. Furthermore, it would be best if you improved your crossovers, shot fakes, and hesitation moves.

Moreover, you need to keep your palm face downwards and grip the ball from the top, or the side but not from the bottom side. By following these simple techniques and practicing correctly, you can avoid palming.

Is dribbling the basketball high a carry?

No! The essential condition of a carry is the same in this case that your hands should be on the top of the basketball facing downwards.

If you do so, it doesn’t matter how high you dribble until you make a violation by putting your hands underneath the basketball facing upwards.

Is punching a basketball illegal?

Yes! If a player punches the basketball with a close fist, it comes under violation and results in loss of possession.

A true basketball player should master the ball-handling, including crossover, hesitation moves, and shots fake to avoid the embarrassment caused by the referee’s carry call. Nowadays, carrying is primarily subjective that depends upon the referee’s call.

Furthermore, palming occurs very often in professional League but often avoided by the referees due to its nature that can lengthen the game for hours. Moreover, it doesn’t mean that carry doesn’t occur; it occurs but not very often. However, it would help if you would be confident to try new moves without hesitation but keep in mind the carry rules to violate.